Have I ever met my double? Is Dead Ringer secretly a true story…? Er, no. But here’s a quick rundown of the times I’ve been mistaken for people who look like me.

I was on the island of St John in the US Virgin Islands recently, (and, yes, I know this is a hideously braggy beginning to a story,) and I stumbled up to the beach bar for a mango daiquiri. (Sampling the local culture and all that.)

The bartender hailed me jovially: “I know you. You were here last week. English girl. Hangs out with JJ.”

Reader, I was not there last week. I do not know anyone named JJ.

We’ve all had these kind of misunderstandings. Someone glances at you, sees a facial feature or two that looks familiar, and mistakes you for someone else. That’s not a doppelgänger. Just a mix-up.

Sometimes, though, the resemblance goes deeper.

I’ve never met my doppelgänger, but I have reason to suspect she’s out there. Why? Because of a strange run-in I had a few years ago.

I was strolling through the campus of the University of California, Berkeley on a perfect sunny day (another braggy story beginning – I’m sorry, my life is usually very boring! 90% of the time, I am at my desk, typing!). I was on holiday to visit friends, but I had some time to myself, so I cut through on a new route through the campus. Rolling green lawns, the Campanile towering in the background. 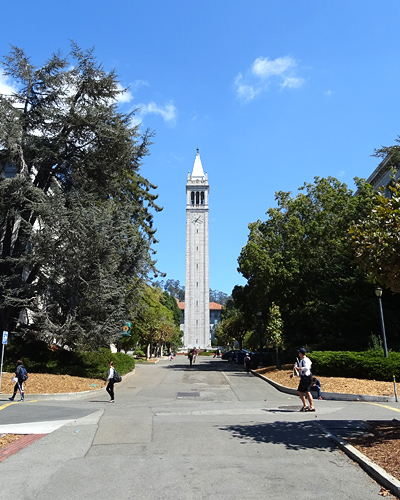 A woman bounded up to me, as if I were a friend. She started chattering away. Then, presumably noticing my baffled expression, she stopped.

I demurred again, and the woman emphasised how much I looked like her friend.

Apparently she worked in the university’s engineering department and one of her colleagues was the spitting image of me.

This was strangely flattering, for someone who has a BA in Literature and not much else. Oooh, there’s another version of me out there, a smartie-pants academic type.

Actually, on second thought, maybe it wasn’t flattering. Maybe it was giving me an inferiority complex. At the time, I was doing gruntwork for a PR company and wondering if admin was all there was in my future. Meanwhile, my doppelgänger was out there killing it.

The friend-of-my-doppelgänger wandered off, still visibly floored by my resemblance to this person I didn’t know.

Looking back, I wish I’d collared her, demanded to be introduced to this engineering wunderkind who shared my face.

Maybe I was a little apprehensive, though. Anyone who’s read Dead Ringer knows that I suspect only bad things can arise from meeting your double…

Tell me your doppelgänger story! Have you ever met someone who looks spookily like you?